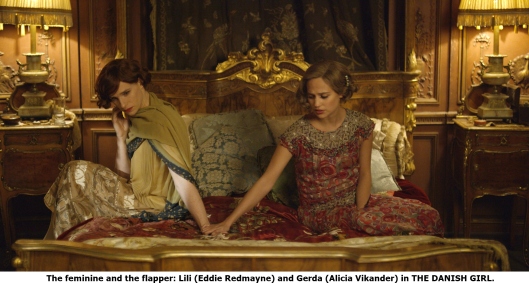 2015 has been quite the year for movie fashion, from the mid-century style of Brooklyn, Carol, and Trumbo to the Swingin’ 60s mod of The Man from U.N.C.L.E. and Legend. But costuming is never more striking than in The Danish Girl, in which Eddie Redmayne stars as Dutch painter Einar Wegener who becomes pioneering transsexual woman Lili Elbe opposite Alicia Vikander  as Einar’s supportive wife and fellow artist Gerda Wegener. Both actors’ performances are extraordinary and they are enhanced by Paco Delgado’s costume designs that empathizes how chic and fashion-forward Gerda is in adopting the latest 1920s styles, in contrast to Lili who favors the ultra-feminine and old-fashioned.

“Paco Delgado is a genius,” says director Tom Hooper (The King’s Speech, Les Misérables) on a visit to the San Francisco Bay Area where The Danish Girl was a Mill Valley Film Festival opening-night selection. “He’s done Pedro Almodovar’s films for years and I discovered him—I was doing a commercial for Captain Morgan rum set on a pirate ship in Spain and he’s Spanish and I was told that he’s the best guy. He kind of conjured amazing costumes out of thin air. Then we did Les Miz together and I thought his eye for detail was extraordinary.

“We were led a lot by the photos we had of the real Gerda and Einar,” he adds. “There were some on the internet, but we commissioned some new research in Denmark and got a few more. At first, it became clear that Gerda’s eye for fashion was immaculate. The real Gerda was probably even more out there than some of the things we did. One of the ways she paid the bills was doing illustrations for fashion magazines. She did covers for Vogue in her life.”

The photos Hooper and his team uncovered did not just give them a sense of Gerda Wegener as a fashion plate, it also offered them another key to Lili. In searching for words to describe Lili’s sense of style, the director finally lights on “bourgeois conservative.” In a sense, he thinks she dressed so as to blend in within a conservative community.

“I think she felt safer in a kind of conventional style of clothing than to draw attention to herself with something kind of more extreme,” Hooper says. “What was extraordinary was the Lili was aspiring to a very different idea of the feminine [than Gerda].

“But it also seemed to me that the film doesn’t involve Lili learning to be like Gerda as a woman. Lili’s body language as a woman is nothing like Gerda’s. Gerda’s actually more masculine. I enjoyed the surprise of the fact that you might think that Gerda being obsessed with painting Lili that Lili would kind of become encouraged to identify with Gerda’s femininity, but they’re quite distinct. I also like the idea that Gerda’s idea of felinity is often quite masculine, so there’s a play of gender roles.”—Pam Grady