The 39th edition of the San Francisco Jewish Film Festival, July 18-Aug. 4, kicks off with Fiddler: A Miracle of Miracles, a documentary about Fiddler on the Roof, the musical that became a Broadway phenomenon and later a 1971 Oscar-winning film. That opener sets the stage for a festival rife with films about the business of show, its personalities, indelible moments in entertainment history, and even a documentary about a camera beloved by filmmakers and its inventor. Here is a report on five of the most notable, followed by a list of the remaining show biz titles. –Pam Grady 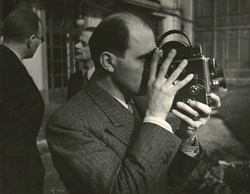 The world may be increasingly digital, but celluloid still exists, and the Bolex 16mm movie camera is still manufactured. The story of that camera and its inventor, Russian-born Jacques Bolsey, is the subject of this enchanting documentary. Made by Bolsey’s great-granddaughter Alyssa Bolsey, who had access to Jacques’ journals, schematics, cameras, and footage (generously employed throughout the documentary), Beyond the Bolex is both industrial history and the personal story of the Bolsey family. It is also, in a way, a fascinating detective story as Alyssa Bolsey unravels the enigma of a man she never knew but with whom she shares a deep love for the beauty of the analog image.

Director Michael Curtiz’s (Ferenc Lengyel) battles with studio and government interference over the production of his latest film, Casablanca, are only the start of the filmmaker’s troubles in this elegant, noirish Hungarian production. Supercilious government suit Johnson (Declan Hannigan) insists the movie should be wartime propaganda. Curtiz resists the reduction of his work to knee-jerk jingoism even as he wrestles with how to end the picture. Complicating matters is the appearance of his estranged daughter Kitty (Evelin Dobos), demanding attention he scarcely has time to give. Luminously shot in black and white (with the occasional red flourish to suggest shooting in progress) with an evocative score by Gábor Subicz, the drama does not gloss over the less savory aspects of Curtiz’s personality while also depicting him as a strong-willed artist unafraid of ruffling powerful feathers.

It Must Be Schwing – The Blue Note Story

Not to be confused with Blue Note Records: Beyond the Notes, the other recent documentary about the legendary New York jazz label, this entertaining German import more tightly focuses on the label’s founders, Alfred Lion (1908-1987) and Francis Wolff (1907-1971). United in friendship by their love of jazz from the time they were teenagers and Jews forced to flee Hitler’s Germany, the two made their passion into their business in forming the label that would record such artists as Thelonious Monk, Art Blakey, Lee Morgan, Herbie Hancock, and so many more jazz giants. Eric Friedler’s delightful doc employs what one would expect from a film of this nature, a lot of archival footage, bursts of the music upon which Blue Note made its name, and interviews with music historians, Blue Note recording engineer Rudy Van Gelder, and plenty of musicians, including Quincy Jones, Sonny Rollins, and Hancock. But to fully tell Lion and Wolff’s story, Friedler turns to animation, a stroke of inspiration that brings the men and their fascinating story to vivid life.

The actor, Anton Yelchin, who died in 2016 at 27, has 68 credits on the IMDB, an astonishing number for someone so young and encompassing shorts, TV shows, and movies ranging from small indies to the latest Star Trek franchise. Garret Price’s moving documentary, produced by Yelchin’s Like Crazy director Drake Doremus, suggests the promise unfulfilled: the parts he had left to play, the directorial debut he was planning, his immersion into photography. More vitally, this heartfelt film—chockful of clips from Yelchin’s films, including his own boyhood efforts—reveals Anton as a bright, curious, and caring personality in stories told by his friends, coworkers, and his heartbroken parents, figure skaters Viktor and Irina Yelchin.

What She Said: The Art of Pauline Kael

In time for Pauline Kael’s centennial birthday comes Rob Garver’s documentary that will appeal to Paulettes everywhere, a film that spins the story of one of the last of the truly influential film critics. A poultry farmer’s daughter from Petaluma, she got her start on the radio at KPFA in Berkeley before pulling up stakes and heading East where she eventually rose to prominence at The New Yorker. Sarah Jessica Parker voices Kael’s words in a film that combines archival footage of Kael and others, clips from many of the movies that she reviewed, and interviews with her daughter Gina James and writers and filmmakers, including Camille Paglia, James Wolcott, Carrie Rickey, Paul Schrader, Francis Ford Coppola, and John Boorman.

Before You Know It

Shut Up and Play the Piano

Standing Up and Falling Down

The Long Goodbye almost didn’t happen, at least not the version that eventually emerged with Elliott Gould as Raymond Chandler’s private eye Philip Marlowe reinvented as perhaps the last principled man in the cynical post-Watergate 1970s. Gould graced the cover of Time magazine in 1970 as “The Star of an Uptight Age.” That same year he received a Best Supporting Actor Oscar nomination for Bob & Carol & Ted & Alice and he starred in M*A*S*H. He was on top of the world. A couple of years later, he was just another unemployed actor when then-United Artists head David Picker told him about the Chandler film, which was then attached to director Peter Bogdanovich. Gould wanted the part and he needed the job, but Bogdanovich had other ideas.

“Bogdanovich couldn’t see me in it,” Gould recalls during a Q&A at the San Francisco Jewish Film Festival where he received the festival’s 2012 Freedom of Expression Award.

The director favored more hard-boiled casting. He wanted Lee Marvin or Robert Mitchum (who would go on to play Marlowe twice in 1975’s Farewell, My Lovely and 1978’s The Big Sleep).

“I couldn’t argue with that. They were like my uncles,” Gould says, but he adds, “We’ve seen them, but you haven’t seen me.”

But then Bogdanovich was out and Robert Altman, who had already directed Gould in M*A*S*H took over the reins.

“You are that guy,” said Altman.

“That guy” in this case being a slobby loner with an obnoxious orange tabby for a roommate, who just can’t let it go when his good friend Terry Lennox (ex-baseball player and Ball Four author Jim Bouton) gets into trouble, even at the expense of his own hide.

That Gould’s Marlowe is not so tough as the traditional Marlowe can perhaps best be summed up by the one question about a costar asked of Gould at the film festival event. Bouton, classic tough guy Sterling Hayden, Laugh-In comedian Henry Gibson, director Mark Rydell, and fraudster Clifford Irving’s mistress Nina Van Pallandt were all part of The Long Goodbye cast. None of them rated a query. No, what inquiring minds wanted to know was, what was it like to work with that scene-stealing cat?

There were no standing ovations for longtime The Simpsons writer/producer Mike Reiss when he stepped up to the stage of the Castro Theatre on Monday, July 26 as part of the San Francisco Jewish Film Festival’s “Jews in Toons” program, compared to the three standing o’s that greeted movie star Kirk Douglas during SFJFF’s Freedom of Expression ceremony the day before. But Reiss was quick to brag that the cartoon program sold more tickets.

“Take that, Hollywood legend!” he crowed.

Reiss was the closing act for a night that began with “When You Wish Upon a Weinstein, “ a Family Guy episode made in 2000 but not shown until 2003 when the Cartoon Network aired it. Original network Fox left the episode – in which family patriarch Peter seeks a Jewish accountant and attempts to get a quickie Bar Mitzvah for his teenage son Chris – to gather dust after it deemed the episode antisemitic, despite the fact that scriptwriter Ricky Blitt is Jewish and two rabbis vetted the script. That was followed by South Park‘s “The Passion of the Jew,” in which Stan and Kenny attempt to get a refund from an addled Mel Gibson after being appalled by The Passion of the Christ while the movie inspires Cartman to emulate Hitler. Finally, in the 1991 Simpsons’ episode “Like Father, Like Clown,” Bart and Lisa attempt to reunite Crusty the Clown with his long estranged rabbi father.

It was 69 minutes of brilliant TV, but Reiss – who also made this year’s SFJFF “Queer Duck” trailer – was the star of the show, delivering a talk interspersed with clips from The Simpsons, Queer Duck, and the cult series The Critic. He was quick to point out that he is a comedy writer, not a comedian.

“It’s like the difference between phone sex and real sex,” he explained, adding, “In my case, it’s 20 bucks for four minutes either way.” 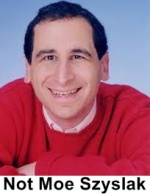 iter not a comedian, Reiss timing was pitch-perfect on lines like, “I’m Jewish. I would never eat a ham sandwich in a synagogue on Yom Kippur – if anyone was watching.”

He was also the master of the dish, revealing that the worst Simpsons guest star ever was a female celebrity he can’t name but whose first name is “Oprah;” his frustration over Paramount’s insistence he remove a Tom Cruise joke from Queer Duck: The Movie; and that if this veteran of Johnny Carson’s Tonight Show writing staff couldn’t write comedy, he’d probably write for Jay Leno.

When “Jews in Toons” ran over, there was only time left for one question in an audience Q&A, a woman who wanted to know if Simpsons‘ bartender Moe Szyslak was modeled after Reiss.

“I get that a lot,” he crumbled, insisting Moe was based on no human at all.

“We started with an ape and we shave some fur,” he said, adding, “Chief Wiggum is a pig. Ralph Wiggum is a lamb fetus.” – Pam Grady

Kirk Douglas took the stage of San Francisco’s Castro Theatre on Sunday, July 24 at the San Francisco Jewish Film Festival, to an extended standing ovation. No surprise there. The 94-year-old actor is, after all, one of the very last classic Hollywood stars still living. But the applause wasn’t just for the 87 movies, 10 plays, and nine books Douglas has to his name or for his very survival, his having survived a 1991 helicopter crash and 1996 stroke that left him with impaired speech. He is the SFJFF’s Freedom of Expression award winner this year, feted not for being a movie star, but for his pivotal role in ending the Hollywood blacklist of the 1950s when he insisted that Dalton Trumbo attach his own name to his screenplay of Stanley Kubrick’s 1960 historical epic Spartacus.

It was Douglas, who served as executive producer as well as star on the film and who is currently writing a book entitled I Am Spartacus, who optioned Howard Fast’s novel. He originally hired the author to adapt his own book, but as Douglas revealed to SFJFF Executive Director Peter Stein during an onstage Q&A, “Howard Fast wrote a terrible screenplay.”

So Douglas turned to Trumbo, a member of the Hollywood 10 who had 11 spent months in prison for contempt of Congress for his refusal to discuss his political associations with the House Un-American Activities Committee and had subsequently found himself unemployable in Hollywood – at least under his own name. Writing under pseudonyms, his scripts for 1953’s Roman Holiday and 1956’s The Brave One were both Oscar winners. “Sam Jackson” was the name that he was going to use for Spartacus, but despite being warned that his own career might suffer if Trumbo received screen credit, Douglas insisted on standing on principle.

“I think if I was 10 years older, I might not have done it,” Douglas told Stein. “When you’re young and impulsive … I just had to do it. I’m glad I did it now.

“He thanked me for giving back his name,” he remembered, adding, “Names are what give you life.”

To close out the Freedom of Expression event, the SFJFF screened Spartacus.

“I would stay, but I saw the picture,” laughed Douglas before leaving the Castro stage. “It’s good. You’ll like it.” – Pam Grady