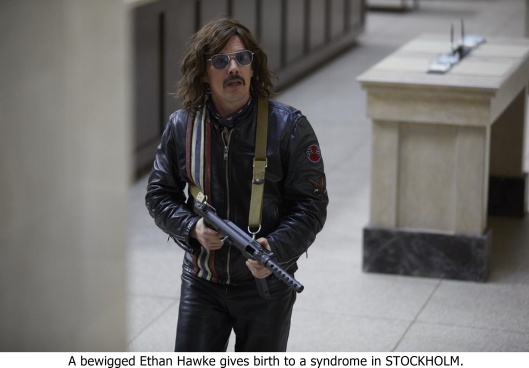 People know the name “Stockholm Syndrome,” but few know its etymology. Writer/director Robert Budreau aims to correct that with his new drama Stockholm. The condition in which hostages begin to trust and ally with their captors owes its moniker to a 1973 bank robbery turned hostage situation in the Swedish capital, recounted here–more or less. Names have been changed, and so have other details. And the lead kidnapper was most definitely not an American, which he is for the film’s purposes. But that alteration makes way for Ethan Hawke, who delivers a charismatic performance that’s not only larger than life, it’s larger than the movie. That’s not necessarily a bad thing.

Lars Nystrom (Hawke) enters the bank alone but is soon joined by his friend Gunnar (Mark Strong in bad hippie hairpiece—actually, so is Hawke, but his is supposed to be a wig). There are three hostages and the bank is surrounded by cops. Lars is a charmer. It doesn’t take him long to gain the sympathy of his captives, particularly bank officer Bianca (Noomi Rapace). Heavy-handed police tactics only encourage the hostages to trust Lars and Gunnar.

Stockholm is entertaining enough, if ultimately forgettable. Hawke is the best thing about it with the rest of the cast saddled with playing characters that are not particularly well drawn. Also, the whole problem with making a movie about the roots of “Stockholm Syndrome” is that the crime for which the condition is named pales in comparison with another caper associated with the syndrome: the 1972 robbery of a Chase Manhattan bank that inspired Sidney Lumet’s 1975 thriller Dog Day Afternoon. That movie with a livewire Al Pacino and John Cazale as his dim-witted sad sack partner set the standard for hostage taking movies where the Stockholm Syndrome comes into play. Stockholm is diverting but Lumet set a high bar that is almost impossible for other films to reach. –Pam Grady