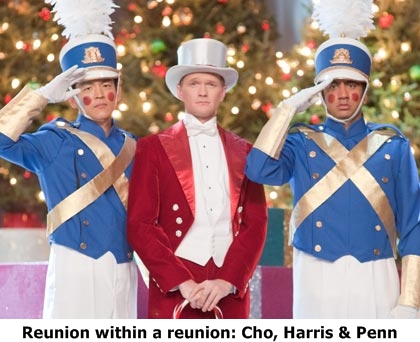 In San Francisco to promote A Very Harold & Kumar 3D Christmas, the third of the outrageous and outrageously funny stoner comedies that he has starred in with Kal Penn, John Cho ponders just what it is that accounts for the success of the franchise.

“I always feel like the key to doing a Harold and Kumar movie is you make it earnest,” he says. “And primarily what we do is make Harold and Kumar’s relationship and friendship believable. If Harold and Kumar are real and set up – as they always are – as a romance between the two guys in a tale of love, then almost anything goes around them. I feel that that’s the key and you just do that. I feel that this a Christmas romance movie between two men. If you just do that and have everything else happen around them, I feel like that’s the formula if there is one.”

In the latest installment of the pals’ continuing adventures, the movie opens with that bromance on the skids. Kumar (Penn) is still a stoner and a screw-up, while Harold (Cho) is successful in business and in his marriage. The hunt for a Christmas tree good enough to please Harold’s disdainful father-in-law Mr. Perez (Danny Trejo) and perhaps earn Harold a little of the old man’s respect brings them together. Chaos reigns in a movie that could be the Yuletide cousin to Martin Scorsese’s After Hours as bad breaks and bizarre encounters dog them through the night. There is even a reunion within the reunion as Harold and Kumar wander into a theater and are thrust on stage to back up their old friend Neil Patrick Harris in a holiday extravaganza.

“The song-and-dance number was the most delightful thing to film,” Cho says. “I was up close and personal watching the triple threat that is Neil Patrick Harris, the triple-named Neil Patrick Harris. Triple-named, triple threat. It was just so preposterous to me that in a Harold and Kumar movie, I would be doing this old Hollywood dance number. That’s the absurdity of that world, and to me, there’s no better example of that absurdity than us in toy soldier costumes.”

The laughs in A Very Harold and Kumar 3D Christmas are strictly adults only, including a preposterous, ribald tribute to the family classic A Christmas Story. Despite that bawdy humor, the movie perfectly evokes the holiday spirit and Cho thinks he knows why.

“We’re both paying homage to and perverting Christmas tradition,” he says. “Harold and Kumar, and hence the movies, are pretty well meaning. There’s a lot we couldn’t get away with if the movies at their core didn’t have that. There’s an innocence to it. Like this movie is a perversion of Christmas movies, but it’s also very traditional and it affirms family values and it’s about love between the two guys and it’s about love between their significant others. At their heart, that’s what they’re about, strangely enough, and the movies have a rather childlike, innocent attitude about them.” – Pam Grady