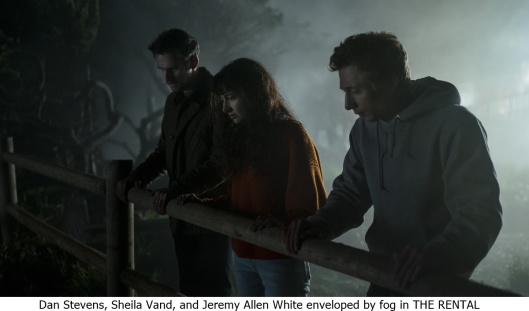 There is such a thing as “too good to be true.” That is the terrain actor-turned-director Dave Franco explores in his feature directing debut, The Rental, a chameleon of a film that morphs from relationship drama to edge-of-your-seat thriller in a compact 88 minutes. What The Shining did for isolated mountain lodges, The Rental stands to do for luxury home shares. Be afraid, very afraid of what might be lurking just below sleek surfaces and a host’s five-star rating.

The house is huge, really too big for two couples, Charlie (Dan Stevens) and Michelle (Alison Brie), and Charlie’s brother, Josh (Jeremy Allen White), and Mina (Sheila Vand), on a short weekend getaway. But the home’s beauty and its placement on a bluff overlooking the ocean are the perfect backdrop for the celebration of business partners Charlie and Mina’s latest success. At least, that is the theory.

Mina’s immediate dislike of Taylor (Toby Huss), the property’s caretaker, and faint but evident fissures in both couples’ relationships cast discreet shadows over the trip, but part of the beauty of the script that Franco wrote with mumblecore veteran Joe Swanberg (Drinking Buddies, Happy Christmas) is that he spins a yarn where the audience is far more clued in than the characters.

The weekend never quite goes as either couple plans – Michelle is on a different wavelength than everyone else when it comes to having fun, Charlie and Mina both have reasons to question their relationships, and  Josh has a troubled past that affects his relationships with his sibling and his girlfriend. So far, so mundane, but Franco privileges the viewer with another point of view, one that hints of malevolence in the offing, Someone is watching. The question that hovers is whether the trouble in the offing will come from within or outside of the house?

Performances are uniformly excellent, even if it is hard to work up much sympathy for characters that are whiny, entitled, and sometimes downright awful. The plot is set at a low simmer, only coming to a full boil in the last half hour or so. The sedate tempo, Danny Bensi and Saunder Juriians’ eerie score, and the pea-soup fog that surrounds the house at night blend into a menacing atmosphere. The tension slowly ratchets up until at last the house reveals its horrifying secrets. For this sleek, suspenseful film’s director, it is quite a calling card. –Pam Grady

The Rental is playing in drive-ins, theaters, and digital and cable VOD platforms.