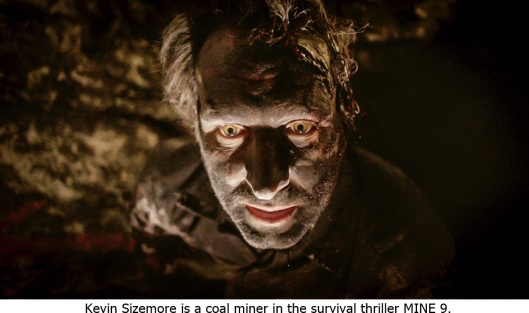 Real coal miners appear on the screen during the closing credits of writer/director Eddie Mensore’s sophomore feature Mine 9, which makes its world premiere March 8 at the Cinequest Film & Creativity Festival in Silicon Valley. They talk about their work and how it is a family tradition and how long a workday is and how many years they’ve been going down in the pit. Mensore pays respect to these men in this way, even as the story he has just spun is chilling and leaves the viewer with a question: Why in the world would anyone do this kind of work?

Set in a bucolic Appalachian community and against an evocative soundtrack of country, folk, and blues songs – a few originals, mostly traditional – performed by Atlanta musician Max Godfrey, Mine 9 neatly sets up the circumstances facing a group of miners. They know conditions aren’t safe, but they don’t really have much of a choice except to descend two miles down into the earth and go back to work. Economic conditions are so harsh in the region that the choice comes down to risking one’s life for the sake of a job or starve. All except 18-year-old Ryan (Drew Starkey), joining the family business as he starts his first day of work, have families to feed.

Mensore paints a vivid picture. From the grime that encrusts the men from head to foot to the claustrophobic conditions of working in the pit, this is pitiless, backbreaking work. And that’s before the methane explosion that leaves them with caved in walls and scant oxygen. Given that the concerns expressed by Zeke (Terry Serpico), the miners de facto leader, have been utterly ignored by management, can they even expect rescue or are they truly on their own?

Mine 9 delivers on its premise as a thriller. Mensore’s storytelling is economical as he sets up a situation in which survival is always in question. Characters are only lightly sketched, but terrific performances by Serpico, Starkey, and the rest of the cast give the tale emotional weight. Mine 9 isn’t a horror movie, precisely, but it might as well be. It is certainly horrifying. –Pam Grady