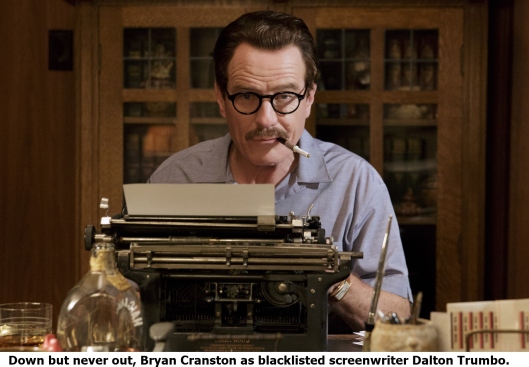 Director Jay Roach has built a career mixing absurd comedy, including all three Austin Powers movies, Meet the Parents, and Dinner for Schmucks, with political fare that includes Recount and Game Change. Trumbo fits somewhere in the middle of both those poles, a serious subject in its retelling of the screenwriter’s imprisonment as one of the Hollywood Ten—jailed for contempt of Congress for refusing to play ball with the House Un-American Activities Committee’s communist witch hunt—and subsequent blacklisting. There is tragedy in what it costs him, particularly to relationships with old friends like actor Edward G. Robinson (Michael Stuhlbarg). But there’s also absurdity in the way Trumbo spits in the face of those who would deprive him of his life’s work and a living by employing fronts and pseudonyms to take credit for his scripts, even managing to win two Oscars that wouldn’t be properly credited for decades. It’s a subject that clearly fascinates Trumbo director Jay Roach. After weeks of promotion, he is still enthusiastic on a recent visit to San Francisco.

Q: Before you started this project, how familiar were you with the Hollywood Ten and the blacklist?

Jay Roach: I knew something about it, because one of my teachers at USC was Edward Dmytryk, and he was the tenth of the Hollywood Ten, in a way. I say tenth, only because there were nine writers and he was the only director. His story was so complicated, because he came out of jail and did name some names. I might be projecting on to him, but I always felt he was haunted by it a little bit. He made more films and was a really great guy, but I could tell that even the other faculty members had a bit of an attitude about him. I have to confess, at that time, I was just so trying to learn to make films that I didn’t delve very deeply into it.

It wasn’t until I came across this script—John McNamara, coincidentally, had also taken courses from blacklisted people; Ring Lardner Jr. and, I think, Albert Maltz, who were part of the Hollywood Ten, and Ian McLellan Hunter, taught at NYU. It was weird that we came together on this without knowing that about each other.

The more I learned, I couldn’t believe that no one had told the story. I really didn’t know anything about Trumbo, the person, the talent, the voice, all these complex aspects of his personality, that’s what hooked me…[He was] this eccentric, combative, irascible, stubborn man who could also write really great comedy. The tone of the movie, I think, is really derived from me enjoying how funny he was, but also knowing it was very high stakes, very serious. There was a tremendous cost to not just his life—and he kind of got off easy—but there was a tremendous cost and damage done to so many careers.

Q: In Bryan Cranston’s portrayal, Trumbo comes across as larger than life. He clearly sees himself in this heroic—you can see the little boy in him reading Greek myth.

Jay Roach: I love that you spotted that, because he had a kind of idealistic belief in the power of storytelling as a healing force in a civilization. ‘I’m going to tell stories about people trying to cope and figure out how we should then live and organize in a world where we don’t get along by default.’ He was Don Quixote. He really believed in the power of going after windmills like that. Any of us who fall for that are kind of doomed to disappointment, because you can’t change the world that easily, just telling a story. We hope this movie will raise questions, but it’s not necessarily going to change anything.

I always use Recount. I thought, ‘After Recount, with voting rights, there’s just going to be a giant wave of reform to make it so much easier to vote. Voter turnout will skyrocket!’ The opposite has happened, and I’m always like, ‘I have to remember, you can only do so much and it doesn’t always add up.’ But you still keep trying. I still believe in at least the power of at least the conversations that come out of the films.

Q: The script is so balanced between lighter moments and the darkness of the situation. I read Victor Navasky’s Naming Names when I was in high school, so I knew parts of the story, but I never know, for example, about the relationship between Trumbo and Edward G. Robinson. Watching that unfold is just tragic.

Jay Roach: Edward G. Robinson’s story, in general, I know there’s a whole other movie to tell about that man’s life, because of what he went through and his own battle for his soul. He was a really good guy, a really progressive guy. He started from nowhere, like a lot of these guys. Trumbo started from nothing, he was a baker. They worked their way up and Edward G. Robinson gets put in that horrible position. He’s not a communist, but he’s given money to various organizations that had associations. He gets asked three or four times and he refuses to testify. Finally, he does. He names a few names, tells himself, ‘They already had them, so it’s not such a big deal.’ But it’s so heartbreaking, knowing that—you can even tell in his autobiography that he’s haunted by that…All these guys were put in such ridiculous, painful places.

Q: And for what? These were screenwriters, filmmakers, actors, hardly enemies of the state, regardless of party affiliation.

Jay Roach: Dalton Trumbo was never trying to overthrow the United States government through movies like Roman Holiday. None of them were. It was a witch hunt, completely show trial. It was answering totalitarianism and the threat of totalitarianism with a totalitarian system to try to get people to conform to a very narrow sense of what supposedly being American was all about. That’s happening today. That’s not unusual. It’s as much about today as it is about 1947. There’s always going to be people who think they’re the patriots. ‘We’re the special patriots. You are the heretics or the traitors or whatever we want to call you.’—Pam Grady