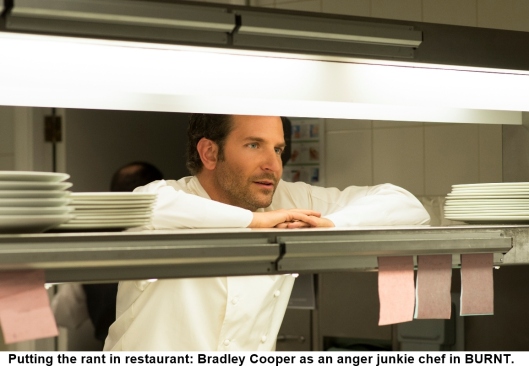 A few years ago over lunch at Waterbar in San Francisco, David O. Russell talked about how Bradley Cooper first came to his attention in The Wedding Crashers and what made him sit up and take notice, “I thought there was anger in him. That character was convincingly angry to me in an intimidating way.” Director John Wells must agree. In Burnt, he’s cast Cooper as Adam Jones, a burned-out Michelin-starred chef on the comeback trail and perhaps the angriest man in England. Adam is a diva with a nasty attitude, but luckily for the movie, Cooper also brings to it his other major attribute, his considerable charm. Burnt needs it.

A decade ago, Cooper channeled Anthony Bourdain in the sitcom inspired by the chef’s memoir Kitchen Confidential. This time he takes his cues from that foul-mouthed stroke-waiting-to-happen Gordon Ramsay, one of Burnt’s executive producers. Temper tantrums come thick and fast when Jones returns to Europe with the grand ambition of earning his third Michelin star after performing penance for blowing his first grand opportunity (and the one that earned him two Michelin stars) in New Orleans by shucking one million oysters. No one seems eager to see him, not Tony (Daniel Bruhl), the London hotelier with a restaurant that Adam expects to commandeer; not the old colleagues he recruits for his kitchen, including Michel (Omar Sy) and Max (Riccardo Scarmacio}; not Helene (Sienna Miller), a talented chef he’s eager to land who knows him by his sorry reputation; and certainly not Reece (Matthew Rhys), a frenemy who came up with Adam in the same kitchen in Paris and who now has his own restaurant.

Despite the romantic complications posed by Helene, Burnt’s focus is mainly what goes on in the kitchen as Adam works his way toward redemption. It’s not entirely convincing. Bumps along the way include the five-year-out-of-the-game Adam’s unfamiliarity with the latest trends—because apparently, there were no food shows, cooking magazines, other literature, or for that matter, fine restaurants to keep him up to date in New Orleans. Seriously? Then when he finally gets with the program, his big revelations are sous vide, which Adam seems never to have heard of before (really?), and presentation, as he begins plating his fare exactly the way food has been plated in high-end restaurants since long before he flamed out—gorgeous food porn made from tiny portions. Also, while Steven Knight’s screenplay tells us over and over again that Adam is one of the world’s great chefs—the one all the others follow, according to the jealous Reece—Burnt never actually demonstrates that.

The movie’s saving grace is Cooper, who finds that rage that David O. Russell noted so many years ago and plays it for all its worth. But if the film were simply 100 minutes of Cooper channeling Gordon Ramsay, it would be unwatchable. An egotist’s profane rants are not the stuff of drama, at least not for an arena with higher expectations than reality TV. It’s a fine line that Cooper walks. He has to be a horse’s ass, yet he also has to have qualities not so curdled sitting just below that turbulent surface. The arc of Burnt is the flowering of that humanity while the anger and arrogance gradually recede. It is a beautifully modulated performance and one that gives rooting interest in Adam’s quest for that elusive third star. Burnt is not exactly gourmet fare, but as cinematic fast food, it’s pretty tasty.—Pam Grady