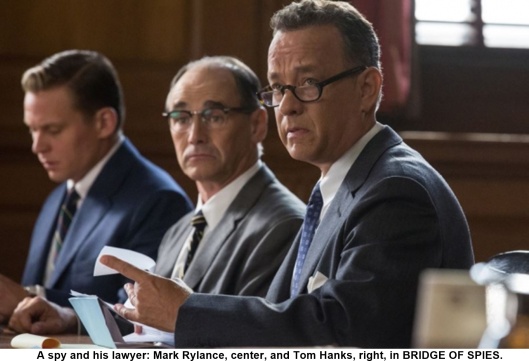 Bridge of Spies begins with a man, later revealed as Rudolph Abel (Mark Rylance), using a mirror to paint a self-portrait. It is a simple image of an artist at work, an ordinary guy, but as he steps out of his studio in Manhattan’s Fulton Fish Market area circa 1957, he picks up the first of several tails. Appearance can be deceiving. It’s a subtle and powerful start to what is Steven Spielberg’s most satisfying film in years, a Cold War thriller inspired by actual events.

By now, you’ve probably seen the trailer where Tom Hanks’s character James B. Donovan avers, “I’m an insurance lawyer,” this his initial answer when he is asked to defend Abel after he’s arrested as a Soviet spy. The reality is not so simple. Donovan was on the prosecution team at the Nuremberg war crimes trials. He is also a crafty litigator. Pay attention when he debates definitions of an accident with an opposing counsel in an early scene, because his philosophy in the realm of car crashes extends to foreign policy. Donovan is exactly the right man for the job he’s been asked to do, but not in the way the people who recruit him to do it—including his law partner Thomas Watters Jr. (Alan Alda)—mean it. They simply want Donovan to give a respectable sheen to a done deal—see, in America, even a filthy Russian operative gets a fair shake in court, too bad he got the electric chair—but Donovan doesn’t see it that way. He maybe reluctant to take the case, but once he’s in, he approaches Abel like any other client in need of his services. One of the delights of Bridge of Spies is watching Hanks and Rylance together and watching that wary relationship change over time.

And if the Soviets hadn’t shot down pilot Francis Gary Powers (Austin Stowell) and his U-2 spy plane in 1960, Donovan and Abel’s place in history might have ended with his trial. But with each side holding one of the other’s agents and those men being privy to state secrets, a prisoner exchanges seems prudent. Donovan is once again pressed into service and sent to East Germany to broker the deal. He has his marching orders from the US government. The Soviets have their own expectations. But Donovan, like Spielberg, is a big-picture guy and he has his own ideas about the negotiations going in, turning a simple exchange into a high-stakes gamble.

The film could use a less of Thomas Newman’s saccharine score, and while the script—credited to Matt Charman and Joel and Ethan Coen—dials back on Spielberg’s usual sentimentality, it’s still there, particularly in relation to Donovan’s family. Amy Ryan plays Donovan’s wife, Mary, and it’s always great to see her, but with little to do other than worry over her husband and beg him to put their family first, Mary is a thankless role. It’s easy to overlook those minor flaws, though, particularly when Donovan is in the heat of negotiations and the stakes seem higher than just prisoners gaining their freedom and getting to go home or in any scene with Donovan and Abel. Mostly, Bridge of Spies is tense and thrilling in a way that few films are now, the suspense arising not from pointed guns but from people talking—what they say and what they don’t. It’s almost a throwback to certain spy thrillers of the ’60s and ’70s and a welcome return.—Pam Grady