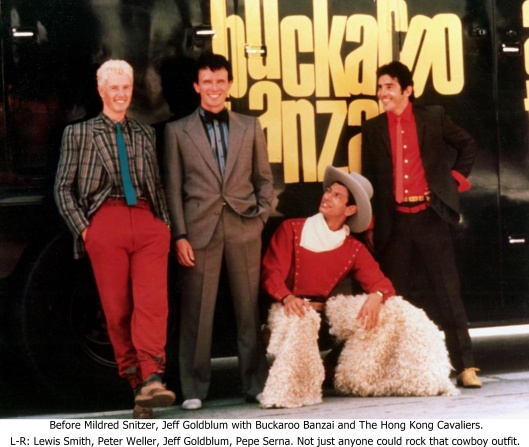 Jeff Goldblum has a seven-week-old son at home, but if he’s feeling the exhaustion of a new parent, he hides it well during the final performance of his weekend engagement at San Francisco’s Hotel Nikko. The headliner at Feinstein’s cabaret, the 62-year-old pianist and his jazz band, The Mildred Snitzer Orchestra—guitarist John Storie, tenor saxophonist James King,  and drummer Kenny Elliott, and joined this evening Bay Area musicians, bassist Dan Feiszli and saxophonist Lincoln Adler—have already played one show earlier in the evening before taking the stage again at 10pm.

Well, technically, the show starts at 10pm, but Goldblum begins working the room a good 20 minutes before that, playing a kind of six-degrees-of-Jeff-Goldblum movie trivia game and chatting with fans. His conversation is free form: He hates stays in his collars and always removes them from his shirts. (He had sent out his white shirt to be cleaned at the hotel and was amused/bemused that it come back with stays inserted.) He thinks he looks like a Jewish school student in his classic black suit, glasses, and porkpie hat. At one point, he asks for someone to name a standard. I call out “Stardust,” and he sings the Hoagy Carmichael classic a cappella to my section at the very back of the room.

Throughout the evening, Goldblum will digress with movie trivia (San Francisco edition and quotes); debate with fans who ask him if he prefers noodles or sandwiches, but who muddy the water by insisting pizza is a sandwich (Goldblum disagrees); chat with songwriter Dick Holler, the writer of Dion’s ‘60s hit “Abraham, Martin and John,” when the man’s companion points him out at the front of the stage; and in general, play the bandleader and show host delivering on his promise to keep his audience entertained.

With his mix of bonhomie and ineffable cool, Goldblum is the consummate showman. Not that The Mildred Snitzer Orchestra needs him to be that. When the band gets down to business, they are all business. Playing regular gigs at Rockwell Table and Stage in Los Angeles, they’ve honed themselves into a tight, soulful outfit. An elegant, intimate room like Feinstein’s suits the ensemble well, whether doing Thelonious Monk proud or performing an impromptu cover of Billy Joel’s “Just the Way You Are.”

Being out among people, Goldblum is in his element. The show ends up with a rendition of the Duke Ellington standard “Caravan” that is both awesome and epic, allowing very member of the outfit a moment. But it’s not over for the actor/musician, who stations himself in the middle of the room for pictures, autographs, or to just mingle with any fan who approaches him. It’s a long line, he’s been hard at it for two hours or more, and he’s still as energetic and even-keeled as ever. There are cool cats. Then there’s Jeff Goldblum.—Pam Grady