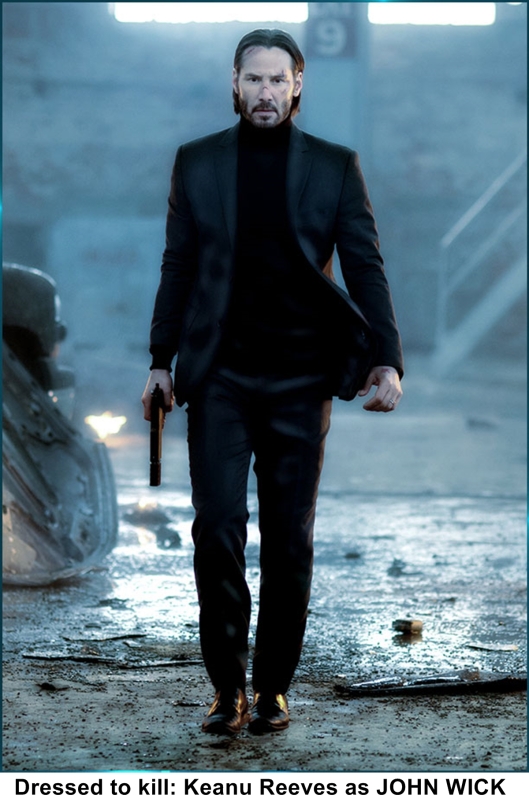 “I once saw him kill three men in a bar with a pencil. A pencil! He gave them all lead poisoning.” OK. I made that last line up, but if Russian mobster Viggo Tarasov (Michael Nyqvist) had uttered such a thing while explaining just how dangerous fresh-out-of-retirement hit man John Wick (Keanu Reeves) is it wouldn’t be out of place in the over-the-top world of John Wick. A live-action cartoon—perhaps an Itchy & Scratchy episode with Reeves as the most insanely efficient Itchy in the world and Tarasov and his henchmen the hapless Scratchys—it is a thoroughly enjoyable exercise in grandiose action and ultra ultra-violence. Gallon upon gallon of fake blood flows in this palate cleanser before Oscar season gets underway.

Reeves turned 50 in September, but when it comes to old man Wick and his prey, Tarasov’s spoiled brat millennial son Iosef (Game of Thrones‘ Alfie Allen), there is no contest. It is all Viggo can do to try to protect his boy by unleashing his army of mobsters (including his right-hand man, played by Dean Winters aka Allstate’s “Mayhem”—are we sensing a theme here?) and putting out a general, $2-million contract on Wick’s life. Wick anticipates Viggo’s actions and just doesn’t care. Mistaking the recent widower for an ordinary New Jersey suburbanite, Iosef broke into his house to steal Wick’s cherry ’69 Mustang and killed his puppy, a parting gift from John’s dead wife Helen (Bridget Moynahan). For that, Iosef and anyone who tries to shield him will pay with their lives as Wick transforms himself into an impeccably dressed grim reaper.

Screenwriter Derek Kolstad and director Chad Stahelski have created a world in which civilians barely exist amidst operatic and very public outbursts of violence. When Wick reenters a life of crime, he returns to an entire universe where one guy (John Leguizamo) runs a mob chop shop, another (David Patrick Kelly) specializes in body disposal and crime scene cleanup, a priest (Munro M. Bonnell) protects mob cash, and John is just one among many assassins.

There is even a hotel, the Continental, that caters exclusively to the criminal class, overseen by Winston (the great Ian McShane) who enforces the joint’s one hard rule—no conducting business on the premises—from his booth in the hotel’s ’40s-syle supper club. It’s all wackily retro and a little daft, a world in which  Krugerrands (“coin”) are the means of exchange. These guys are so old-fashioned that they’ve probably never even heard of bitcoins and still think of Silk Road as an ancient Asian trade route.

Those Wick doesn’t shoot he attacks with a full-body assault, fists and legs flying. However morose the grieving character is, it’s been years since Reeves has had a role that is this much pure fun. Once Wick’s quest for vengeance is underway, the action is nearly non-stop and Reeves is the ball of kinetic energy at the center of the storm. He wears middle age as well as he does his designer suits. John Wick is a lean, mean, killing machine.

The body count is high. The plot is ludicrous. The humor is pitch black, mostly unintentionally so. No one will mistake John Wick for art, but it’s a bloody good time—emphasis on the bloody. —Pam Grady