Charlie McDowell, Elisabeth Moss, Mark Duplass, The One I Love 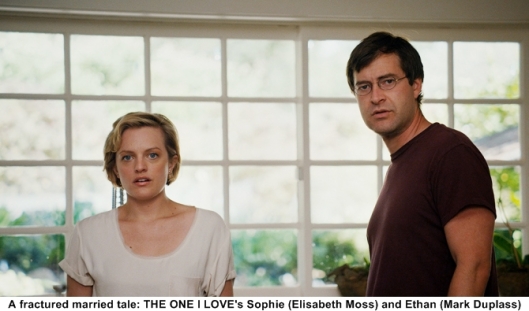 In The One I Love, Ethan (Mark Duplass) and Sophie (Elisabeth Moss) have reached a rough patch in their marriage. Their therapist (Ted Danson) suggests they try to reconnect during a weekend retreat at a gorgeous country house. There is much more to this wildly inventive romantic comedy than that, but the challenge in writing or talking about director Charlie McDowell’s sublime feature debut is to not give too much away.

“It’s certainly tricky,” says Duplass. “It is such a good conversation piece, but at the end of the day, we have just discovered that you do better as a viewer of this movie when you don’t know what’s in there…We did this really cool test screening where we put 100 people in one theater on the left and 100 people on one theater on the right. People on the left knew everything about the movie that you would know from an average Hollywood trailer, lots of spoilers. People on the right went in blind, just with, ‘It’s a romantic comedy with Mark Duplass and Lizzie Moss. They go on a couples’ retreat to try to save their relationship.

The One I Love was born out of Duplass and McDowell’s friendship and desire to make a movie together. Duplass furnished his pal with the kernel of an idea that McDowell and his writing partner (and the film’s eventual screenwriter) Justin Lader transformed into a 10-page outline fleshing out the story and characters.

“Then we picked this location to set it in and reverse-engineered the movie to take place inside this location and wrote for all the things in there,” says Duplass. “It’s kind of following along in the thing I’ve always described as ‘the available materials school of filmmaking.’ Don’t write a script and figure out how you’re going to make it. Write a script for what you have at your disposal, so you know you can make it.”

Moss, another friend of Duplass, was quickly recruited to play Sophie, and added her input into her character. Producer Mel Eslyn also contributed notes to the story. The project came together quickly. It was only six months from the time that McDowell and Duplass started talking about the movie until they were actually shooting it.

“There’s something about the energy that happens when you do that,” says Duplass. “Everyone’s still excited about the movie. It still feels fresh. It’s like the difference between getting married when you’ve been dating for six months and getting married after you’ve been dating for five years. When you’re standing there on the altar and you’ve just been together, you’re like, ‘This is so exciting! This is so exciting!’ After five years, you’re like, ‘Yeah, I suppose it’s about time we do this.’”

McDowell says he is often asked what The One I Love‘s ending means, but the ending relates to everything that comes before it. With or without that which makes the film so unusual, it is the story of a relationship. McDowell points out that it is a romantic comedy that focuses on real people with real problems rather than the usual rom-com stereotypes and conventions. Still, Duplass notes, what the film is actually about only emerged in the making of it.

“The theme that came out sort of posthumously, after the first draft of the outline, is that we tend to when we’re first dating people, to put forth this perfect version of ourselves where we try to be more sensitive and more loving and more intelligent,” he says. “They bring up a book and you’ve never read it and you say, ‘Oh, I love that book!’ Then the shine comes off and how do you deal with that disparity between who you said you are and who you really are? That seemed fun and playful, but also meaningful, and we were like, ‘This is a good theme to explore through this magically real plot machination that we employ in the movie.’”

Adds McDowell, “They’re in this place a lot of us get into where you’re in a rut and it’s like, how do you get out of it and should you get out of it? A lot of times it’s, ‘Should we cut our losses and should we move on?’ We kind of came to a place in their relationship where Ethan had cheated on Sophie and so he’s kind of created this separation between them. Now, they’re stuck. A lot of times something needs to happen for a couple to get out of that rut.” —Pam Grady