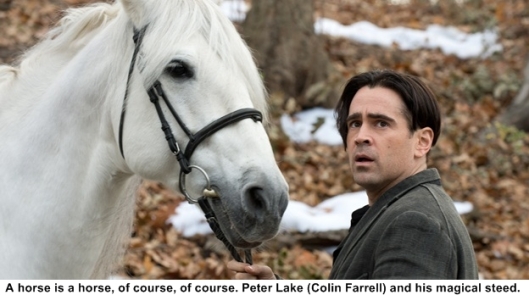 It is such a pity that Colin Farrell’s character in Winter’s Tale isn’t named Wilbur and that the white horse that adopts him and becomes his protector doesn’t talk. Akiva Goldsman’s magnificently wrongheaded adaptation of Mark Helprin’s 1983 novel is so unintentionally funny that it might have worked as a big-screen remake of TV’s Mr. Ed. As the magical and moving drama that it is supposed to be, it is a misconceived failure.

Farrell is Peter Lake, an orphan and burglar in early 20th-century New York, who falls on the wrong side of demonic crime boss Pearly Soames (Russell Crowe) at about the same time he meets beautiful consumptive Beverly Penn (Jessica Brown Findlay). Soames is upset that Lake quit working for him and that “he started having ideas … Ideas can do more good than harm.” Soames is also somebody one doesn’t quit on and so he has Peter – and by extension, Beverly – in his cross-hairs. In Peter’s favor is the white horse with the otherworldly properties that acts as a kind of guardian angel, keeping Peter a gallop away from Soames and his goons.

Peter’s friend Humpstone John (Graham Greene) informs him that there is a miracle inside of everyone and that is the theme that overrides a story that jumps 100 years in the future. Peter, Pearly and another character or two haven’t aged a bit, but Beverly’s little sister Willa is now played by 89-year-old Eva Marie Saint. (Goldsman doesn’t adjust for the three decades since Helprin’s book came out, so perhaps the film’s biggest miracle is that Willa would be something like 110 years old and yet she’s still robust enough to run the family business.) When Peter meets food writer Virginia Gamely (Jennifer Connolly) and her young daughter Abby (Ripley Sobo) – like Beverly so long ago, redheaded and ill – there is a sense of destiny and of history possibly repeating itself.

The elements in place here – a romance made complicated by one lover’s illness and the target on the other’s back, a man fated to walk the earth until he achieves his purpose, a vengeful boss with a deadly secret, a sick child, a protective steed, miracles, the stars as a repository of souls (seriously) – churn together to form a kind of ridiculous stew. It is a handsome stew, Caleb Deschanel’s cinematography is gorgeous and production designer Naomi Shohan’s recreation of pre-World War I New York is exquisite, but it is ridiculous nonetheless in both plot and dialogue. Of course, things could always be worse. Winter’s Tale could have been merely deadly dull, badly executed melodrama. Instead, it’s inadvertent comedy.

The film further suffers from one piece of jaw-droppingly bad casting in Will Smith as “The Judge,” aka Lucifer. As God’s fallen angel, the congenial Smith does not compute. Certainly, the devil can be charming, but he should have some bite and that is something Smith lacks.

The other actors fare better, especially Farrell, who skates through on his considerable charm. But his charisma can only carry the movie so far. In absence of a better script and a stronger story, a movie being sold as a poignant Valentine’s Day romance instead evokes laughter and memories of a certain talking equine. – Pam Grady