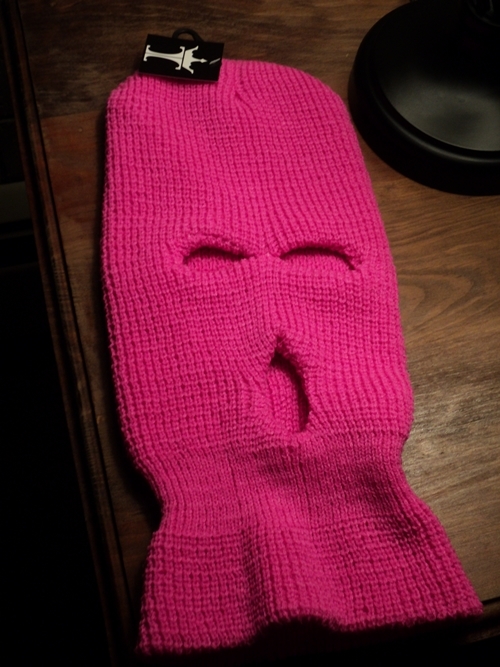 The first swag of Sundance 2013 is hilarious, the Pussy Riot: A Punk Prayer balaclava in neon pink, just like the brightly colored ones that the Pussy Riot collective members wear in performance as a sign, so says Pussy Riot’s Nadia in the film of their intent to “bring joy to the world.” My joke is that everyone who gets one of these should participate in a flash mob – robbing banks. We’d get caught, of course, and go to prison, but at least we’d have committed an actual crime, unlike Nadia, Masha and Katia, imprisoned ostensibly for a 40-second performance in Moscow’s Christ the Savior Cathedral that offended the faithful. There is much more to it than that, of course, as directors Mike Lerner and Maxim Pozdorovkin demonstrate in their insightful, thoroughly entertaining, and enraging documentary.
Watching Pussy Riot: A Punk Prayer is a little bit like falling down a rabbit hole as the Russian state and the Russian Orthodox church ally themselves against these three young women – proving the point of the performance that church and state are far too entwined. It was not just that performance that got the trio and their confederates (their unindicted co-conspirators as it were, since they were never caught) into trouble, but that was the tipping point. Feminist performance artists in firm opposition to Russian President Vladimir Putin, the women of Pussy Riot had a loud and flamboyant way of getting their point across, upsetting a society that values social order. Or as the prosecutor in their trial put it, “We want to live in a calm place where we can feel protected.”

While Nadia and Masha still languish in prison after their convictions for “hooliganism,” Katia was released on appeal and made an appearance at Sundance via Skype. She laughed when asked if she and the others ever debated whether they deserved any punishment for their actions.

“We used to joke about this a lot,” she says. “No, we didn’t deserve any punishment. We were just performing feminist art.” – Pam Grady