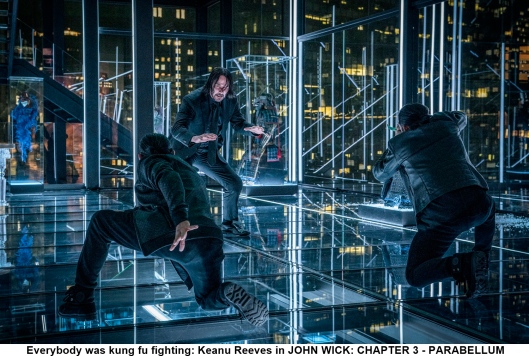 John Wick (Keanu Reeves) is quite the timepiece. He is the Timex watch of assassins: He’s takes a licking and keeps on ticking. In John Wick: Chapter 3 – Parabellum he takes more licks than seems possible and still survive and even thrive, but if John Wick (it doesn’t seem right to call him either just “John”or just “Wick”) has a superpower, it is his preternatural ability to get up and keep fighting even when every fiber of his being is no doubt willing him to just stay down. John Wick is determined to live and no worldwide assassin army is going to stop him—or so he chooses to believe.

Mr. Wick is in quite the pickle in this latest extravagant and darkly humorous display of nonstop mayhem. He has become the enemy of The High Table, the worldwide crime syndicate that controls the activities and lives of assassins like John Wick. The Continental Hotel, overseen by slippery manager Winston (the magnificent Ian McShane) and always accommodating concierge Charon (Lance Reddick), the killers’ neutral ground, is off-limits to him. More worrisome, The High Table has declared him “excommunicado” and placed a $14 million bounty on his head. There is no safe place in the world for John Wick.

This latest chapter of John Wick’s saga ups the action ante. Not only does he face horde upon horde of extreme fighters and martial artists, including John Wick superfan Zero (Marc Dacascos, hilarious), but director Chad Stahelski stages fights on horseback and motorcycles. It is rock ’em sock ’em robots into infinity and beyond. The battles almost never cease save for a quick sojourn into the Sahara Desert, one of the few instances where John Wick appears in daylight. He is a nocturnal creature, emphasized by the dark alleys where much of the action takes place and the subdued lighting in the Continental, the theater where he seeks help from the mysterious Director (Anjelica Huston), and the Moroccan hideout of his reluctant ally Sofia (Halle Berry). Most film noirs aren’t this dark.

Reeves receives valuable support from McShane, Reddick, Dacascos, Huston, Berry, Laurence Fishburne as John Wick’s fellow High Table rebel The Bowery King, and Asia Kate Dillon as The Adjudicator, The High Table’s punishment enforcer. But make no mistake, the success of the John Wick franchise is all due to Reeves. Despite the fact that John Wick is a lethal killing machine, he cuts an empathetic figure thanks to Reeves’ quiet charm. And it is Reeves’ athleticism and grace during the movie’s many fight sequences that elevate what could be ho-hum action into a kind of adrenaline-inducing murderous ballet. Reeves makes John Wick an assassin worth rooting for, no small feat with the body count he’s accrued over three outings. In his mid-50s, Reeves hardly seems to have lost a step off of his Matrix days and that is a beautiful thing to behold. —Pam Grady